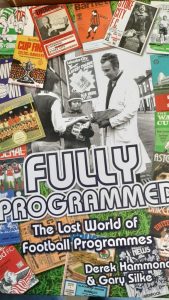 Fully Programmed tells the story of the The Lost World of Football Programmes.

Collecting football/soccer programmes is now a cottage industry. The authors try to make sense of the phenomenon is this well researched book.

All clubs from lofty heights of the Premiership to the lowest depths of the Football League feature.

The authors have won acclaim for their famous Got, Not Got series of books.