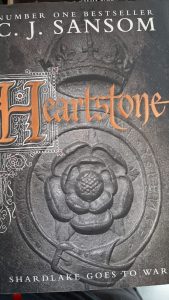 England is at war. Henry VIII’s invasion of France has gone badly wrong.

Meanwhile Matthew Shardlake is given an intriguing legal case by an old servant of Queen Catherine Parr.

He is asked to investigate claims of ‘monstrous wrongs’ committed against a young ward of the court, which have already involved one mysterious death.

This book is number 5 in the Shardlake series.  A beautiful hardback version.