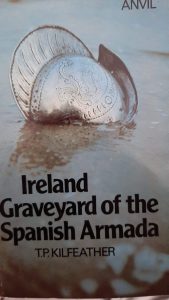 The author has produced a book  that is  essential reading for anybody interested in Irish / European history of the 16th Century.

It is a short book but reveals the chilling events that occurred around our coastline just after the middle-ages.

The ill fated Spanish Armada sailed from the Tagus in May 1588. After a disastrous battle with the English, the Spanish fleet sought shelter off the West coast of Ireland.

This was a terrible mistake. Almost a quarter of the fleet sank. It is estimated that over  6,000 sailors perished.

The book  is not a reference book but it should be made more available through Irish tourist outlets.