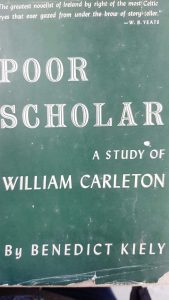 In 1948 Benedict Kiely published Poor Scholar. This is a critical study of the life and works of William Carleton.

W B Yeats described Carleton “the greatest novelist of Ireland by right of the most Celtic eyes that ever gazed from under the brow of a story teller”.

These days Carleton is largely forgotten. He lived from 1794 to 1869 and was born in Co Tyrone.

He is best known for his Traits and Stories of the Irish Peasantry. This book did not endear him to the majority of the population. It painted the his fellow countrymen in an un-favourable light.

Our copy is an American first edition. It is signed by the author Benedict Kiely.

The book is in excellent condition throughout.