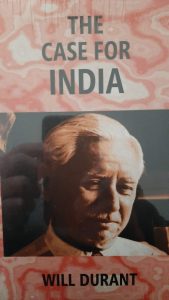 Will Durant had embarked on a journey around the world to write what became the magnificent eleven-volume The Story of Civilization. In 1930 he visited in India for the first time.

He was, ‘filled with astonishment and indignation’ at what he saw and read of Britain’s ‘conscious and deliberate bleeding of India’.   He set aside his research into the past to write a passionate denunciation of this ‘greatest crime in all history’.

The Case for India, remains a classic. It is a work of compassion and outrage.

Durant tore apart the self-serving justifications of the British for their  shameless record of rapacity in India.