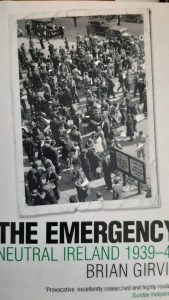 A blistering account of Ireland’s neutrality in World War II, an episode which still scars Irish thought and politics today. Brian Girvin has written a fresh and original history of Ireland between 1939 and 1945.

Eamon de Valera refused to join the war against Nazi Germany and declared his country neutral. To the endless frustration and anger of Churchill—and later Roosevelt—de Valera pursued an isolationist policy that changed the course of Irish domestic and foreign politics.

The Emergency is a unique and important addition to any understanding of Ireland and World War II.