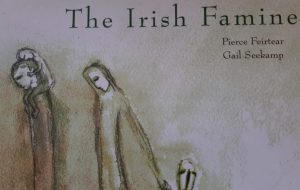 In 1845 there were eight million people living in Ireland. Many of these people were living almost entirely on potatoes.

Then the potatoe blight came. The potatoes rotten in the ground.

Over the next six years, a million people died, Two million more were forced to emigrate.

This is the story of the Famine that changed Ireland for ever.

This brief history of the Famine is clear and thoughtful.