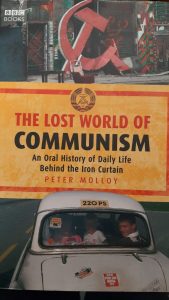 1989 was a year of revolution.  It marked the collapse of communism in Eastern and Central Europe and an end to an entire way of life for millions of people behind the Iron Curtain.

Beginning in Hungary, the retreat from communism picked up speed over the summer when the Poles won an overwhelming victory in free elections over their pro-Soviet rulers.

East Germany and Czechoslovakia achieved freedom with surprisingly little violence. Only Romania witnessed a savage battle in the capital and the summary execution of the notorious Nicolae Ceausescu.

The author collected an oral history of daily life behind the Iron Curtain.  This book adds to our knowledge of the historical events of 1989. These events eventually led to  the ending of Communism in Europe.