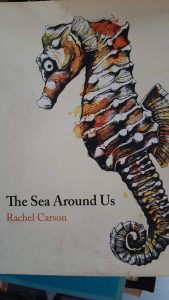 The Sea Around Us presents an overview of the subject, a natural history of the oceans in which Rachel Carson discusses such matters as their origins, the evolution of life and  the creation of volcanic islands.

Rachel Carson was one of the world’s most accomplished marine biologists. She began her career an aquatic biologist and she became a full time writer in the 1950’s.

This book is part of her famous Sea Trilogy. The other two books are The Edge of the Sea Under The Sea Wind.